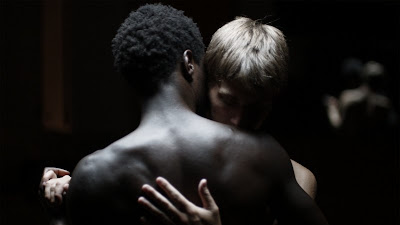 A landmark feature film by writer/director Kareem Mortimer, based on his 2007 short, Float, Children of God is the first gay-themed feature to come out of The Bahamas; and a powerful and beautiful story about love, fear and religious intolerance.

It is 2004, and the Bahamas are swept by a wave of anti-gay fervour driven by the Christian right, fuelled by the news that a gay cruise ship may soon be docking at one of the island's ports. Against this backdrop of scaremongering and hate, we meet Johnny (Johnny Ferro), a creatively-blocked art student struggling with an obsessive-compulsive disorder that sees him cringe away from any human touch; Romeo (Stephen Tyrone Williams) a young man struggling with his obligations towards his family and his band; and the devoutly religious Lena Mackey (Margaret Laurena Kemp) an anti-gay activist whose hypocritical preacher husband has just given her a sexually-transmitted disease. On the Bahamian island of Eleuthera, where Johnny has come at the urging of his art teacher to try and rekindle his love for painting, these three people's paths collide, with life-changing results.

Exquisitely shot by cinematographer Ian Bloom, and incorporating actual documentary footage of the 2004 anti-gay protests to great effect, Children of God features superb performances from all the cast, even those in minor roles, such as Craig Pinder as Johnny's father, Mike, who clumsily but tenderly tries to support his gay son as best he can; and Van Brown as the Reverend Clyde Ritchie, who embodies the compassionate face of Christianity.

Mortimer's assured direction, and his adherence to the film-maker's mantra of 'show, don't tell', offers up a series of excellent scenes, such as the achingly romantic moment in which Johnny and Romeo dance together without music, and the emotionally bruising conclusion.

Originally conceived as a purely romantic story, the film turned darker following a series of homophobia-driven murders in the Bahamas in 2007-2008. One of the men, who Mortimer knew personally, was almost decapitated during the violent assault which took his life. But despite the film-maker's obvious and understandable distaste for the anti-gay sentiments fostered and fuelled by the church in the Bahamas, Children of God is a remarkably even-handed film. Deeply moving, powerful and disturbing, its multi-faceted exploration of humanity, of loneliness, love and hypocrisy, is highly recommended.

Nice review of a fine film: as I said at the time, I liked the film a lot too.